James Albert Barker was the next younger brother of my Great-grandmother, Harriet Matilda Barker who was born in 1859.

Soon after his father, William Barker arrived in Mound Fort he was placed in the Sunday School as superintendent, until he was called on a mission to the state of Minnesota, for which field of labor he left on the 19th of April, 1881.

He was called home on account of the death of his son, Albert, on October 23, 1881. His older son, William Frederick, had died two years previously of the same disease, typhoid fever and pneumonia. His daughter, Nora, also had it but recovered.

Here are the Barker family plots.  It’s possible the grave marked Andrew Barker d. 1881 is actually the plot for James Albert who died in 1881. 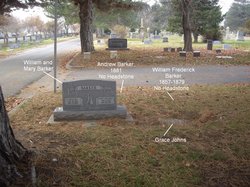