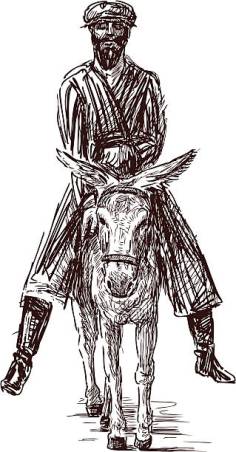 I promise that if you persist in developing this mine you and your sons will taste the fires of hell.”

Those unsolicited words, uttered at the gathering of a family at supper by total stranger, forever changed the course of the lives of the family Holt. It was at the end of a long, busy, summer day in 1879. The animals had been fed, and the savory meal was being prepared in the kitchen. As she went to front gate to call her family in for the evening meal, Parthenia looked down the darkening trail to see a man on a donkey approaching the house. Stopping, he asked for a drink of water. Parthenia invited him to stay for the evening meal.

An elderly man with a long beard, educated and soft-spoken, engaged in easy conversation with the family. Soon James was telling him of the Goldmine, found while he was out cutting his winter supply of fire wood. James had filled two sacks with ore and brought them home. Curiously he sent them to Salt Lake for assay. Word came back from Salt Lake – the ore was rich in gold and silver. Since then, James had made several trips back to the mine and dug more ore. Sacks of ore were now piled in the corner of the kitchen and the stranger was given a chance to examine.

James and his son were excited. They planned to work the mine. Dreams of riches were woven that night and with each telling, the fever for gold climbed higher. The stranger listened to the stories and dreams. Finally he spoke, “brother Holt, I promise you if you go on with this mine, you and your sons will all go to hell. This mine is not for you. But if you forget it and go on with your work here on the ranch, honor your Lord and your family, you will save yourself and your sons will become honorable man.”

James looked at the stranger in astonishment. Why was he saying these words? They were uttered with certainty, but what right had he to make such a harsh pronouncement at the table where he was a guest? James held his ground and continued eating, but the delay and spontaneous conversation was gone and the meal soon concluded.

Courteously, James asked a stranger to stay the night, but the old man decline, saying he had to be getting on. Leaving the room with a heavy heart, James went out into the twilight to make his nightly rounds, followed by the old man who unhitched his donkey and mounted. As the stranger headed toward the canyon, James walked to the end of the yard with him, sending him on his way with a wish of Godspeed.

Pondering upon the words the man had spoken, he stood in the fading light of what had begun a good day, his head lowered. Parthenia joined him. As they stood, softly conversing about the pronouncement of their recently parted guest, the hoof beats of the donkey faded. Looking up shortly thereafter, James and Parthenia noted that the old man and his mule had disappeared from sight. He was never to be seen again.

But the conversation with the old man weighed heavily upon Holt’s mind. A few days later he decided to ride to the mine. To his surprise, as he approached the place where he had marked off his claim, everything was changed. The terrain was different. James found he could not identify one familiar landmark. For a man who knew the hills and valleys around his ranch very well, he could not understand what had happened. He felt lost and disoriented as he tried again and again to locate the mine.

He went back often, but the mine had vanished. Members of his family also looked, but the Goldmine was gone. This legend, passed down through six generations of the Holt Family concludes with those telling the story saying there are happenings in the world that are not be explained. And to this day, through descendents have searched, the location of mine and the gold are still hidden.

Eventually, James came to believe the mine was hidden from him and his family by a heavenly being, one of the three Nephites who roam the earth, according to the Book of Mormon. This man came to warn him of the fate he and his family would suffer if they persisted in developing the Gold mine.

Wealth from farming and other endeavors have come to James Holt descendents who live in enterprise St. George, Gunlock, Cedar city and in many parts of the United States. But the wealth is not come from gold.

James Holt was a practical man, and an ambitious and a man of great energy. His ranch was located near a stream in the Escalante Desert near what is now Enterprise. It was only natural that the Holt’s ranch become a stage stop and a haven for all passersby and their animals. Here they stopped for food water and rest.

It was the stopping of a heavenly stranger that change the Holt’s life for which, toward the end of almost 90 years of life, he acknowledged, made him a better man. After 27 years on his beloved ranch, he died January 12, 1894 and was buried in the Holt family Cemetery at the ranch. Parthenia, his beloved wife is buried beside him. Even on death’s bed, they both believed the man who supped with them that evening in 1879 was one of the three Nephites sent to save them from the fires of hell. 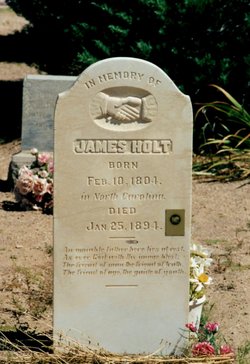 Research conducted over the years show that all its James Holt’s sons become bishops of wards:

Recent research conducted by Clayton E. Farnsworth to study what was has been the result of the above promise, if any on the sons, grandsons and great grandsons of George A. Holt produced some interesting information as to the number that have served in stake and ward leadership positions:

There may be others, but these are the only ones that the study has been able to reveal.