Martin Benjamin Bushman was born 5 February 1841, Bart, Lancaster Co., Pennsylvania, and died 31 October, 1927 (age 86) at Lehi, Utah. He was an infant when his parents made the thousand mile trip from Lancaster Co. to Nauvoo in 1841, and was only six years old when they were driven from Nauvoo and traveled across Iowa to Council Bluffs. He vividly remembered sitting on the lap of Joseph Smith, the Prophet, and of seeing the baptismal font, etc. in the Nauvoo Temple just before they left that city. By the time the family started for Utah in 1851, Martin was old enough to help with the oxen as well as with the family chores, and after they reached Lehi he helped to harvest the first crops which were raised in that vicinity, and helped on his father’s farm and was one of the cattle herders until he reached maturity.

In 1861 he was called on a mission to the Missouri River to bring back emigrants from Europe. This was a five month round trip with a four yoke oxen team and wagon, and on the way back the teamsters walked so that the women and children could ride.

In his farm work, Martin B. tended to be a perfectionist, and always tried to produce the best crops and livestock in the valley and he received public commendations for this several times, the last one for his excellent beet crop raised during his 84th year. He was also a good carpenter and made most of his own buildings and some of his household furniture. He willingly contributed free labor to help build pioneer roads to the canyons and canals to bring water to the farms, and brought stock to aid cooperative enterprises such as the ZCMI stores, the Provo Woolen Mills, the Utah Telegraph Lines, etc. He helped to purchase threshing machines, and was the major mechanic and grain measurer during most of his productive life. In civic affairs he was a Lehi City Councilman, Marshall, and Road Supervisor.

There were no deductions for labor or any other expenses when Martin paid his tithing, but it was simply a tenth of his gross income, and in all of his dealings with others he showed the same spirit of honesty. He was very strict in Sabbath observance and his families never missed their night and morning prayers. He was very regular in attending church and took part wherever his abilities were needed. One of the first callings was as Sunday School teacher, in which capacity he served for 30 years, and six of his children served also as teachers. Likewise he took an active part in the M. I. A. For thirty years he belonged to the Seventies Quorum and was one of the presidents part of the time. In his last 20 years he was mainly active in the High Priest’s Quorum, in Ward teaching, and in temple work. While he never went on a mission, he quietly gave financial aid to many who were on missions.

On the hundredth year after their father’s birth, Martin B. And his two younger brothers, John and Albert went on a genealogical mission to Pennsylvania, where they were well received by the relatives and gained much valuable information about the family. On this trip they also visited many of the historic LDS sites. Some of them were where they had lived when they were young.

Martin was one of the Committee of three who were chosen to erect the Lehi Pioneer Monument, and he helped to compile the first History of Lehi. He never sought fame, but always lived a quiet life and tried to be honest and true to all. His favorite moto was “a wife, children, and friends are the greatest source of happiness.” 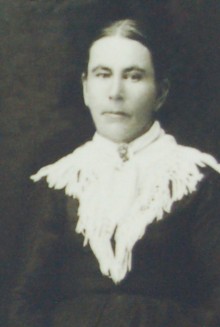 He was married by President Brigham Young, 21 March 1863 in the Salt Lake Endowment House, to Lucinda Ladellia Goodwin, daughter of Isaac Goodwin and Laura Hotchkiss. She was born 4 April, 1843 in Bethany, New Haven Co., Connecticut, and died 9 December 1906 at Lehi. Lucinda was one of the passengers of the ship Brooklyn who sailed around the Cape and settled at San Francisco in 1846. Her mother died on the trip and Lucinda was “farmed out” as a domestic worker part of the time while they were in the “Bay” region, but her family was brought together again while they lived in the San Bernardino colony, where Isaac married again. She learned to speak Spanish fluently while in California, and loved to tell of her experiences among the Mexicans. Her family moved to Lehi in 1858 after spending the winter in Southern Utah.

By second marriage, March 2, 1867, Salt Lake Endowment House, to Martha Worlton, daughter of James T. Worlton and Elizabeth Bourne. She was born 14 Sept. 1849, Bath, Sommersett, England, and died 20 January, 1938 in Lehi. She was a Relief Society teacher at Lehi. 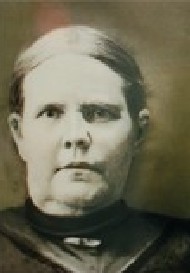