Nancy Catherine Overton Holt was born 28 October 1850 in Fremont, Iowa. At the time of her birth, her parents James and Parthenia Overton Holt, were crossing the plains with the Mormon Pioneers in the James Emmett Company in 1845 to Iowa, then with the James Holt Company to Utah, arriving Oct 27,1852.

Nancy joined the LDS church in 1864 and came to St. George, Utah where she met and married William Slade. They were endowed and sealed in the Endowment House in Salt Lake City on 19 July 1869. At the time, he was 35 and she was 19. William and Nancy went to Pine Valley where they built log houses and worked in the timber. Besides working in the timber, William had the first sheep herd to be taken to Southern Utah. Their first son was born in 1870. They had 9 more children.

You can learn more about the Pine Valley Chapel built in 1868 here: https://annlaemmlenlewis.com/2013/08/17/pine-valley-chapel/ 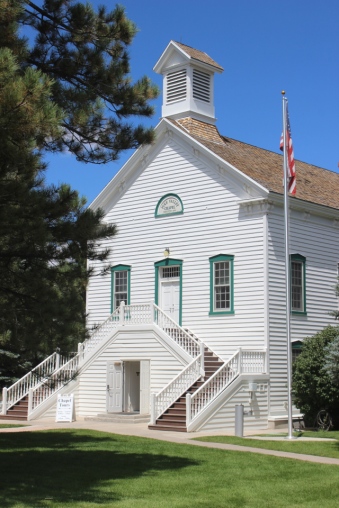 Sometime between 1872-1874, Nancy longed for her family and when her father asked them to com to Holt’s Ranch to help build a reservoir so they could cultivate more land, they sold their property in Pine Valley and moved taking their sheep herd with them.

They stayed at Holt’s Ranch for about 2 years, then after getting the reservoir working they moved again. They went to Panguitch, Utah and took up land, built homes and canals. They worked together with William’s brothers Jefferson, Henry and his sister Clara, and acquired much land, many sheep, cattle and horses.

The Slades were hard workers. William would take loads of wool to the woolen factory in Provo, Utah and bring back bolts of cloth from which Nancy and the other women in the family would sew clothing. Nancy was a lovely seamstress. She would weave the cloth for men’s suits, and cut them out and make them with her mother’s help. She was one of the best tailors they had in Dixie at this time. She also had evening spelling, reading and writing classes for the children. She sang well and taught the children to sing. They were a happy family.

Then came what was known as the hard winter. It snowed four feet deep on the winter ranges. The sheep lay and smothered. Cattle froze to death. Some of the horses survived but had frozen hoofs. William was a broken man, in purse and spirit. They were a happy bunch even though poverty had come to them. Nancy longed to be with with her people so in 1882, William moved the family back to the Holt’s Ranch after disposing of his property in Panguitch.

Nancy’s health was not very good and she nearly lost her life when another daughter was born. After a year at the Ranch, the family rented a dairy known as “Gold Burgess Ranch.” It was near here where the Mountain Meadow Massacre took place. The family made butter and cheese. They learned to sew and knit and read and write. They were still close to the Holt Ranch where they could get fruit, vegetables and visit.

In the Winter, they went to St. George so the older kids could go to school. On 16 April 1886, Joseph Williams was born and Nancy suffered a nervous break down, from which she never fully recovered. She cared for the baby but had to have constant help and care.

William decided to take his family back to Panguitch Lake where he could fish and maybe improve Nancy’s health. William and Nancy and their 8 children and packed up and off they went for the summer. The wagons were loaded with some household things, straw and feather beds, a churn, an iron stove, a wooden tub, a big brass kettle, a bake oven of iron, a wash board, and an old “Howe” sewing machine.

The summer was spent living by the side of the lake in a place they called “the Cove”. There were three cabins, some corrals and shed which was covered with willows and other brush to keep the sun and rain off the beds. The girls slept in one cabin where William built bunk beds. Will had one cabin.

They obtained water from the lake for the house and they would go far out on the lake for drinking water. They strained the drinking and cooking water into a large crock as there were seaweed seeds in the water. The children enjoyed wading in the water. William spent most of his time fishing for lake trout which were salted in barrels and sold to peddlers who hauled them to neighboring towns. They paid ten cents a pound for the fish.

Nancy’s health did not improve, but the baby seemed to thrive as did the other children. Money was very scarce. They had plenty of milk and butter, a few potatoes, fish and some times wild meat. They had very few vegetables and little dried fruit. When it began to get cold William rented a house in Panquitch and moved his family there. William paid for schooling for the children by hauling wood for the large flat stove in the schoolhouse. It was cold with lots of snow and they had no overshoes or rubbers, but their shoes were strong homemade shoes and didn’t get wet easily.

Nancy was ill most of the time. William tried very hard to teach his family to lead good moral lives. He provided for them by shearing sheep and always got top pay when the shearing time was on.

September 1898, William prepared to go to Old Mexico where many of his friends had migrated. He, Nancy, Harriet, Mary Jane, Joe and Frank left in the company of James Marshall and made their way to Mexico. They wended their way southward, crossed Lee’s Ferry into Arizona and then to Mexico. There he did carpentering and gardening but he was a broken man and Nancy’s health did not improve.

William died in Colonia Dublan, Mexico Oct. 22, 1902. He is buried in the Dublan Cemetery, but the exact location is not known.

Mary Jane Slade Curtis says, “In 1930, my brother Joe Slade sent me a hundred dollars that I might join him and the rest of my family in Panguitch, Utah for a family reunion. I hadn’t seen my mother for thirty years; she died the following Fall at the age of eighty two, in Bunkerville, Nevada, at the home of my sister Hattie. Mother is buried there in Bunkerville. My Father died in Colonia Dublan, Mexico in 1902 and he is buried there. (During the exodus of the Americans in 1911, the saints plowed the graves under, and planted grain over them to protect themselves; so exactly where his grave is is a mystery.”

Nancy lived at the home of her daughter Mrs. Harriet Knight in Bunkerville, Clark Co., Nevada. She died at age 79 on 25 April 1931 and was buried in the Bunkerville cemetery.