On Christmas day in 1845, Martin and Elizabeth also went to the Temple and were sealed for time and all eternity. Mob violence continued so that in February 1846 the main body of the saints left Nauvoo for the west. However Martin Bushman, along with a few others, were asked to remain at Nauvoo to plant crops and harvest them to provide food for the many new members coming from the east and elsewhere to gather with the saints. Bounteous crops were raised, but just when they were ready to harvest, the mobbers moved in and drove the rest of the faithful saints away from Nauvoo.

Before they left the city, Martin took all of his children into the temple and showed them the baptismal font resting on the backs of twelve bronze oxen. This occasion was never forgotten by the children. Forced to leave with just a few hours’ notice, Martin was poorly prepared to make the five hundred mile trip from Nauvoo to Council Bluffs, Iowa. 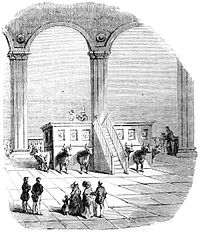 The baptismal font (French engraving of 1850).

Every visitor who wrote about the temple mentioned the baptismal font. It was clearly the most impressive feature of the temple. There were actually two fonts built during the lifetime of the temple, a temporary wooden one, and a permanent limestone one.

The first font was built out of “tongue and groove” white pine and painted white. It was sixteen feet long, twelve feet wide and four feet deep. The lip of the font was seven feet from the floor. The font’s cap and base were carved molding in an “antique style” and the sides were finished with panel work. Two railed stairways led to the font from the north and south sides.

The font was held up by twelve oxen as are almost all temple fonts. They were carved from pine planking that was glued together. They were patterned from the most beautiful five-year-old steer that could be found in the region. The head, shoulders and legs protruded beyond the base of the font, and they appeared to have sunk to their knees into the pavement. The most perfect horn that could be found was used to model the animals horns.

A decision was made to replace the wooden font in 1845, apparently because the water caused a mildew odor, and possibly because the wood began to rot. The new limestone font followed the pattern of the wooden one. Twelve oxen held up the basin, four on each side and two at each end. The oxen were solid stone and similarly were placed and appeared sunken into the floor. Where the oxen met the basin, the stone was carved to suggest drapery. The ears of the oxen were made of tin. The stairs were moved to an East/West orientation making access to the font easier.

A well on the east side of the font provided the water supply. There may have been some kind of tank at the East end of the baptistry to store and heat water.

Thank you for visiting! I hope you enjoy the things shared here.
View all posts by Ann Laemmlen Lewis →
This entry was posted in Bushman Family. Bookmark the permalink.