Maria Elisabeth Bushman is the daughter of John and Lois Angeline Smith Bushman.  John is a brother to my Great-great grandpa, Jacob.

While my husband, Silas D. Smith, was in the mission field (Western States Mission) in 1902, we were living in the little town of Snowflake, Arizona. An epidemic of diphtheria spread throughout our village. That epidemic may have been started when one of the Sunday School teachers, who had been on a vacation to Concho, Apache County, Arizona, a small town in the St. Johns Stake, returned to Snowflake and kissed some of the children, not realizing that she had been infected by the dread disease.

The next Sunday there were four little children aged from two to four years, who had suddenly died from diphtheria. It seemed that most of the families with the little tots of that age were afflicted. No wonder there was a near panic in our small town of about fifty families. Most of those families had children of that age. Never before had such a plague struck our village.

We had no medical doctors at that time. Schools and all public assemblies were closed. Dr. Pierce of Holbrook, the county seat, was engaged to take professional charge of the plague in Snowflake and a strict quarantine was established.

As is customary in all Latter-day Saint homes, when sickness comes we resort to careful nursing and call in the elders who hold the holy priesthood. The elders then anoint the sick with oil that has been consecrated for this purpose and lay their hands on the head of the afflicted giving them a blessing as directed by the Spirit of the Lord. Truly, this sacred administration and the prayer of sincere faith does and will heal the afflicted. But now the quarantine law forbade the elders from entering the homes of the sick.

Our little son, Samuel Preston Smith, then sixteen months old developed a high temperature. Dr. Peirce came in and was concerned. Our four young daughters, Lois, Emma, Daphne, and June; aged three to eight were in the adjoining room. The doctor gave me permission to call in the elders so we went for grandfather Jesse N. Smith, who came immediately and administered the sacred healing ordinance to our precious baby. Young Preston’s fever abated at once and he seemed perfectly well.

In our home we continued the prescribed safeguards and preventive measures, especially one that the doctor was pleased with. This involved keeping the room filled with “lime vapor” made by keeping a pot of lime water boiling on the stove. It seemed to kill the germs of the disease and to purify the air in the room. It seemed to be effective.

One week from the day our baby received the healing blessing from Grandfather Smith, young Preston again developed a high fever. On this same day our seven year old daughter Emma became very ill and the doctor was alarmed with the advance of the disease. The diphtheria membrane was not only in her throat but her nostrils gave evidence too. She also complained of pains in her stomach and kept calling for “Grandpa” to come and put his hands on her head and pray.

Dr. Pierce had been engaged for one month and the time had expired. All the “cases” were well on the road to recovery and mine were just coming down. The doctor had brought two or three doses of anti-toxin to save children who were critical cases. He had been successful in handling every case thus far without the use of the anti-toxin and now all were recovering. But he said if I wanted him to do so he would use the anti-toxin for Preston and Emma before he left. I had a strange feeling about the anti-toxin and told the doctor not to use it on my children. A week or so later Uncle Jim Flake was in Holbrook and saw Dr. Pierce. He inquired about me and my children. Dr. Pierce said, “I have been so thankful that Mrs. Maria Smith would not let me give the anti-toxin to her children. It would have killed them for sure.” Uncle Jim got the idea that the anti-toxin was too old and had lost its value.

On the 16th of November the doctor made his final visit to our home. He had stayed over two or three days and was very attentive. It seemed he dreaded leaving until the children were out of danger. He said to me, “Do not close your eyes tonight. Just watch and nurse them as you have been doing. Don’t let neighbors come in nor take any remedies. If the weather moderates, the children are apt to be alright. But if a storm comes up, you must brace yourself.”

The good doctor left about noon and by five p. m. the storm began. It was a real wintry blizzard. My prayers to the Lord became most fervent. I was not alone and the room was filled with a divine influence. I asked Aunt Ellen Smith to stay with my sick babies while I went over to Grandfather Smith’s home. Due to the quarantine the scheduled stake conference was cancelled. However, Grandfather Smith (Stake President) was meeting with a few General Authorities of the Church at his home. In view of the quarantine, I handed my white sild handkerchief through the door requesting Grandfather Smith to bless that handkerchief so that I could take it back to my two sick children and heal them from their afflictions.

Grandfather quickly comprehended the situation and had the door left open so that I might hear the prayers. My own father, Bishop John Bushman of St. Joseph, was also at the meeting with other Church leaders. They all stood up in a circle in the holy order of prayer. They took the handkerchief in their hands and Grandfather Smith gave a powerful prayer and blessing for the sick, Emma and Preston. My father brought the handkerchief back to me and said he had never heard such an impressive blessing and prayer and that he had perfect faith that my children would be healed. 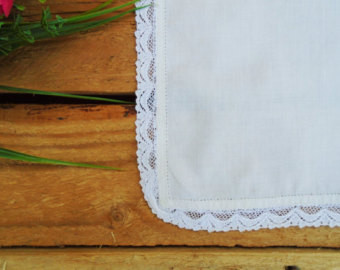 I hastened back through the snowdrifts to my family. Then I prepared young Preston for bead and swabbed his head and entire body with the blessed handkerchief. I had the feeling that his whole being was penetrated with the Lord’s blessing. After placing him in his crib, he fell immediately into a deep and calm sleep and his breathing was no longer noisy or strained.

I then explained to Emma that the quarantine law would not allow Grandpa to come in to bless her. I told her that was why I had taken my new silk handkerchief over to his home where Grandpa Smith and other church leaders, including Grandpa Bushman, had prayed over it and blessed it for the healing of our baby Preston and herself. Then I passed the handkerchief over her head and body, wherever it hurt, so that she could feel the penetrating influence of the healing blessings. Then I tied the handkerchief over her head and covered her ears which had hurt. Emma listened and understood and had perfect faith she would be healed.

Both children slept peacefully throughout the night with no labored breathing. We were certainly not alone that night. In the morning there was no sign of sickness in Preston or Emma. No temperature, no labored breathing, but happy hungry children. Truly the Lord did it all and we praise and thank him for his loving mercy.